Here are some of the videos B&T Garage has completed this year. Hope you enjoy them! In order of oldest to newest.

After 12 months of the semi-flat metallic red, it was time to remove the dipyourcar.com Plastidip. The product is great and help up superbly, but needed to come off. I had a couple spots where I applied it incorrectly, runs, and a spot by the mirrors where is appeared some one peeled it. Possibly while at TMI or a parking lot some where?

Removing the dip wasn’t very hard but was time consuming. I need to determine what to do next, paint or more time. I have some time to fix some door dings and other dents before I do that. 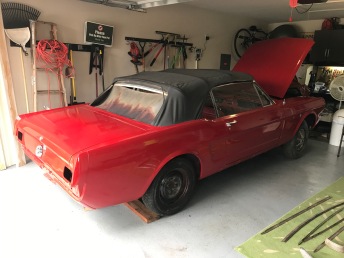 It’s been pretty quiet around B&T Garage lately and that’s going to be changing real soon. Recently I’ve been taking it easy filming and focusing on the 64 1/2 project for Elyse. Look forward to more Project 64 1/2 videos soon

The Texas Mustang Invasion event is also coming up. That’s a great gathering of Mustang enthusiasts from all over the DFW area and beyond. There will be Mustangs from all eras and many great vendors. I’ll be out there with Molly and camera gear. Look for a video of the TMI event as well.

Once I come home from the TMI even Molly is going to be parked for what will be the next series of Foxy Molly Build videos. The new season will focus on the PlastiDip coming off, bodywork being done to repair rust in the rear fender, and the engine being rebuilt. 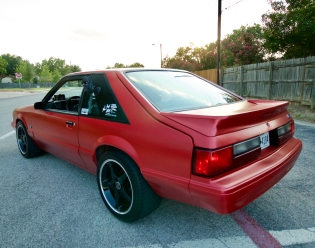 The engine will be assessed and rebuilt as needed with go fast parts over the next several months, think ON3. Molly will also be getting a new clutch to help put that newly found horsepower to the wheels. There will be other goodies in the series that I’ll keep secret for now.

Stay tuned for some great videos!

My 89 Mustang, Foxy Molly, already has a new pair of Eibach springs installed. The problem is that I don’t believe they’re actually for my Mustang. The rear-end sits soo high it looks really silly. So, I bought a used pair from Ken with North Texas Foxbody Club. These should help Molly get a better-looking stance!

Had a great time at the NTFC April 2017 meet at the La Hacienda restaurant in Grapevine, Tx.

Chris from North Texas Foxboy Club and I went to CrashedToys of Dallas and met Chris from the YouTube show B is for Build. It was pretty cool and used the footage to play around with Final Cut Pro and learn more edits. Enjoy!

I was able to attend the monthly North Texas Foxbody meet since mother nature was kind enough to hold the rain for a couple of hours. No one want’s t drive in that mess. Anyway, I shot some video of this meet and slapped some music to it, enjoy.

Some lessons learned, well realized, since I never seem to fix the same mistakes over and over.

A couple of weeks ago I notice my tires were rubbing the sidewall of the tire against the inner fender well. So, I decided to put some small wheel spacers on to prevent the rubbing and would quickly realize that the outside was now rubbing. I was driving down Kroger drive and I hit a dip in the road a little too fast. The dip was deep enough to compress the monster truck-like suspension and gouge the tires outer side wall. I wasn’t sure what had happened until the length of rubber sliced out of the sidewall of the tire started whipping around wildly hitting the rear quarter panel and eventually slung out into the other lane hitting another car. I pulled over and surveyed the damage. I was going to need to roll my fenders and soon, or I could face a blowout.

I parked Molly for a couple of weeks until I could find a fender roller for sale or one I could borrow. I poked around on facebook and posted on the North Texas Foxbody Club page. Several people offered up the use of their fender rollers but were too far away. Doug offered up his services and I decided to head out to Carrolton and get the fenders rolled.

This episode of B&T Garage I work on some small projects. New headlights, wheel spacers, distributor cap and a new coil. I was trying to fix a miss that I’m having sometimes at idle and at throttle lift while driving. The parts didn’t fix the issue so more to come! I also went to my first North Texas Foxbody Club meet. It was pretty cool with great people. I had some camera issues that I hope to resolve for this weekend’s meet. I hope you enjoy my idiocy and thanks for watching!

I had a seat frame/bracket dropped off on Friday that needed some serious help. I also need serious help in my welding skills, so it was a good fit. They get a fixed/restored part and I get to practice my welding if we can call it that. Behold the booger welds!